With more than 4,000 miles of regulated trout waters in Western North Carolina, you can find numerous options for fly-fishing in the area. In the small streams and branches to rivers like the French Broad, David West is an expert in the field.

West is the owner of Trout Cruisers. He customizes rods, ties flies and guides fishing trips in the Appalachians. Trout Cruisers can help you get the most out of your fly-fishing experience. To get you started, Simply Appalachian (SA) spent some time with David, who generously shared some of his experience for our readers:

SA: When did you begin fishing?

West: I’ve been fishing since I was boy, mostly by myself. I’ve always had a love and desire to be in the woods. When fishing, there is something different around every bend in the stream.

SA: When did you learn to tie flies?

West: In 1978, when I was still in high school, I took a job at a local Sportsman’s Pro Shop in Candler, NC. The owner, John Young, taught me to tie flies and build rods at his shop.

SA: What do you fish for in the streams of the Appalachians?

West: I mostly catch brown trout and rainbow trout. Speckled trout are the only indigenous fish to the Appalachian streams, but their numbers are down. Rainbow trout were shipped here from California and brown trout were brought here from Europe. The trout in these streams are six to eight inches long, but they can get larger in the mountain lakes.

Trout live in a fragile aquatic environment, so the size of the fish depends on various environmental conditions. For example, the speckled trout lives in the headwaters of streams, which are susceptible to drought. When the water gets low, it gets warmer. The insects that rely on the cold mountain water can’t flourish, and therefore the fish die off too.

SA: I’ve heard fly-fishing is an art. Can anyone learn?

West: The biggest art to fishing is following the old saying: the right fly, the right place and the right time of the year. Because different insects hatch in different seasons, you have to know which fly resembles the insect that is supposed to be hatching then. Anyone can fly fish, but the most important thing to learn is what’s on their menu, what the fish are looking for.

SA: What are some examples of the insects and the flies you tie?

West: Trout are attracted to thousands of varieties of insects during their different developmental stages. For example, trout eat all stages of the may fly, but depending on the time of the year, they look for flies of a specific size and color. So, using the basic principles of color and size, you can learn many ways to tie a fly that resembles one.

Another example is the caddis fly, which has thousands of patterns. Stick bait resembles a caddis fly in its larva stage. It looks like a worm that builds a box house around itself out of tiny sticks, which is what caddis fly larvae do. It attaches itself to rocks or free-floats in the stream. As these larvae wash down the stream, the fish eat them up.

You can find endless variations of colors and materials to use in tying flies that look like caddis fly larvae. And there are endless possibilities in the types of flies used in all parts of the Appalachians. Most of the insects are the same in the Appalachians as in other parts of the country, but hatching times vary. A good source for learning about fly patterns is Art Flick's New Streamside Guide To Naturals and Their Imitations (Nick Lyons Books) http://www..amazon.com/Flicks-Streamside-Guide which shows how to tie the most prevalent flies. 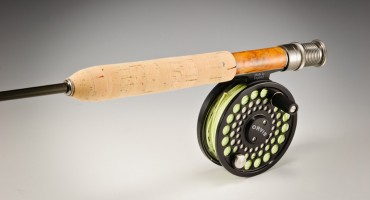 West: The two most important aspects are the quality of the rod — which is usually made of bamboo, graphite or fiberglass — and matching the rod length and weight with the line. You also have to match the rod and line to the person using it and to the rod’s purpose. For example, are you trying to catch speckled trout in a mountain stream or sea bass in the open ocean? It’s important to have a rod with balance, one that feels comfortable. It fishes better.

SA: What advice would you give to someone wanting to fly fish?

West: It’s true you can learn a lot about fly-fishing, but it isn’t necessary to take a course. There are many informational books as well as many local experts. Anyone can catch a fish at any time with the right fly, but the really consistent fisherman knows more and so has better fishing success.

About Simply Appalachian and Becky Rogers