Ahhh, bread. It’s the comfort food of the gods, considered the most delightful carbs you can eat. It pairs well with wine or water and even better with butter. Packed with nutrition, it’s been a staple in Appalachian homes since before it was ever sliced for sandwiches. Breaking bread is synonymous with sharing a meal… with family, friends, even strangers.

Made from corn, wheat, rye or barley, bread can be served hot and buttered, sliced, broken, chunked or crumbled. Few can turn from the temptations of fresh-baked bread. Plain, toasted, grilled or dipped, bread is a favorite food in any form.

The first pioneers who settled in Jamestown and ventured west into the rugged Appalachian Mountains brought bread recipes with them. But bread didn’t always have the taste and texture associated with the loaf of hot goodness today. In fact, the two most common breads on Appalachian tables in the 1700s and early 1800s were fry bread, as made by the Cherokee Indians, and salt bread, a common dish in European homes.

The salt bread made by the first European homemakers in the Appalachians is a testament to the ingenuity of Appalachian foremothers. They are the women who made do with what they had. The name of the bread is a bit of a misnomer, as there actually was very little salt in the dish.

Since yeast was very hard to come by in the remote mountain homesteads until the mid-1800s, they placed their starter ingredients in a salt barrel that sat outside to warm. The heat of the sun made the ingredients bubble and ferment, giving bakers a fermented culture from which they made their bread. The process takes anywhere from nine to 12 hours, which is why you won’t find many places serving salt bread today. 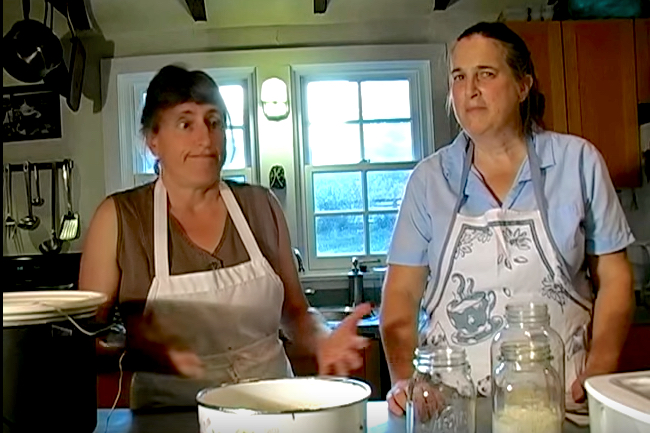 One place exists, however. In Mt. Morris, PA, near the West Virginia border, people who want to remember the old ways can travel to Rising Creek Bakery for the dense, old-fashioned artisan bread that gives off a woodsy, cheesy flavor. The bakery recently started selling starter kits for salt bread on their website. Watch a video of the two women behind the bakery (above) explain their recipe for salt bread.

Necessity was also the driving force behind the Cherokee Indians and their heritage bread-making skills. When the Native Americans were driven from their homelands, they were given very few staples on which to exist — mainly wheat, water, lard and salt. As the Cherokees strived to feed their families, they came up with the fry bread recipe that’s still adored in many places today.

Fry bread is made by mixing wheat, water and salt into a doughy substance and then frying it in an inch-deep pan of hot lard. While many cooks today eschew the dish for its high fat content, the fry bread of old is one of the reasons the Indian nation thrived.

Many restaurants in Western North Carolina still make and serve fry bread. It’s actually the precursor to those elephant ears covered in powdered sugar and fruit that you find in many local state fair food stands. Paul’s Family Restaurant in Cherokee proudly serves fry bread with its burgers.