The Feral Ponies of Virginia

Go see the beauty in the little beasts

Virginia is known as the birthplace of the nation, home to George Washington and Thomas Jefferson. Virginia also has the first English settlement on the continent, a little fort called Jamestown. But Virginia is perhaps best known as the place for lovers, as its advertising campaign went viral long before anyone knew what “going viral” meant.

Now you can add feral ponies to the list of what makes Virginia famous. The feral ponies of Virginia aren’t dangerous, but they do run wild. They inhabit a protected mountainous region of some 20,000 acres that include the Little Wilson Creek Wilderness, the Lewis Fork Wilderness and the Crest Zone of ridges surrounding a section of the Appalachian Trail in southwestern Virginia.

How The Ponies Got There

The ponies aren’t native to the Virginia highlands. If you remember your history lessons, it was the Spanish who brought horses to the New World. In fact, the U.S. Government, or its representatives in the Department of the Interior, introduced the ponies into Grayson Highlands State Park. Releasing the ponies was part of a plan to manage the parkland.

Extensive logging decimated what was once a heavily forested area. Grazing rights were sold to keep the grasses manageable, but eventually even the cattle left. In 1975, the Park Service believed the horses would flourish while grazing freely, and the plan worked. The original herd of 50 horses has become 150. Volunteers with the Wilburn Ridge Pony Association work with the Park Service to care for the animals and manage the herd.

Where to See the Ponies

The Grayson Highlands State Park lies in southwestern Virginia, just north of Highway 58, which skirts the Virginia-North Carolina border. Part of the Appalachian Trail (AT) runs nearby as it follows the ridgeline. The AT leads up to Mount Rogers, the highest peak in Virginia. A rugged four-mile hike gets you there, where — if you’re lucky — you can find the ponies grazing right off the trail. Most experienced AT hikers know about the ponies.

The animals seem to enjoy the view as much as people do. Because of the frequent contact with humans, the ponies aren’t nervous around people like other wild animals might be. But do not feed them! The Park Service encourages the herd to be self-sufficient, and feeding them undercuts those efforts. Take all the photos you want. Hike as far as you can. But do not feed the feral ponies. 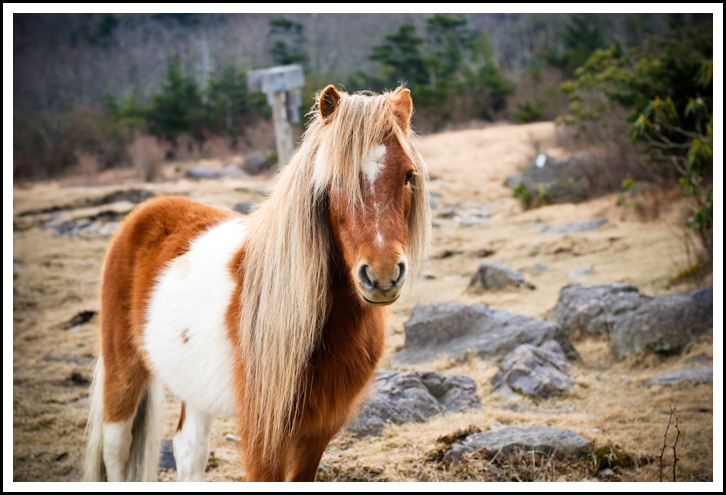 The feral ponies of Virginia are larger than Shetland ponies, which grow to be 28–46 inches tall at the shoulder blades. They are beautiful animals with thick, shaggy coats. The herd usually keeps to itself, but the ponies sometimes exhibit childlike curiosity about human beings. Just remember they are wild animals and can be unpredictable.

The ponies survive the harsh winter months by migrating down the peaks into the valleys of the parkland. The Wilburn Ridge Pony Association provides veterinarian services, winter food and salt licks. The nonprofit group also manages the herd’s size, annually holding an auction of some captured ponies. You can find more information on the auction at the Grayson Highlands Fall Festival website.