Get Pinched by a Crayfish — Before They’re Gone

Crayfish are among the many species under attack by extensive development and mining in the Southern Appalachians.

Because the Southern Appalachians never glaciated, the region contains some of the most bio-diverse plant, animal and insect life outside of the tropical rainforests. Many species, including humans, have thrived in the mountains’ consistently high-quality environmental conditions. 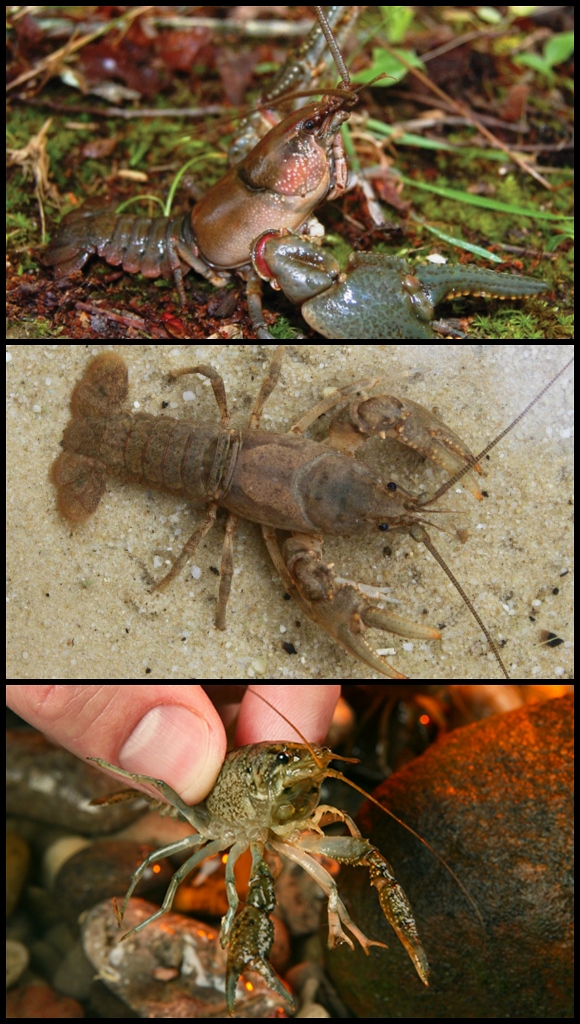 One such creature is the crayfish, a crustacean in the same family as lobsters, shrimp and crabs. There are more than 80 different species of crayfish in the Appalachians. Crayfish are predators; they eat both plants and animals. While they live mainly on insects, insect larvae and worms, they also eat plants and the eggs of frogs, fish, salamanders and toads.

Children love hunting for the eight-legged crustacean. Also known as crawfish, crawdads and mudbugs, they are easy to find in freshwater streams and in the shallows of lakes throughout the mountains. In fact, the number of crayfish you can find indicates the health of that waterway. But beware: the little buggers can give you a mean pinch with the two pincers called chelae they use to protect themselves.

Crayfish play a role in the ecological pyramid by serving as food for some people and more often, as bait for fishermen. They help control the insect population and clean up streams and rivers of dead animal and plant matter. Crayfish also serve as food for larger fresh water fish.

The crayfish, so abundant throughout the ages, has come under attack lately. The U.S. Fish and Wildlife Service is considering adding a number of crayfish species to the list of threatened and endangered animal species. The Asheville Field Office of the government agency, located at Isothermal Community College in Spindale, North Carolina, works with the college to identify, educate and advocate for the conservation of this and other endangered species.

Most recently, the Southern Appalachian Creature Feature, as the joint program is called, focused on one new species of crayfish discovered in 2005 called the Grandfather Mountain crayfish (pictured to 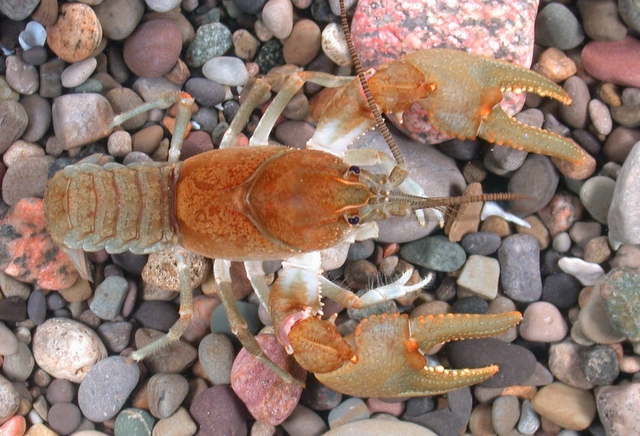 to right). The program led to startling discoveries about the history of the Appalachians, as noted in the researchers’ notes:

“In addition to the notion that North Carolina is probably the only place in the world this species is found, part of what makes it fascinating is… that the Grandfather Mountain crayfish is most closely related to crayfish found in the New River and Tennessee River basins. The Linville River flows into the Catawba River, and eventually into the Atlantic Ocean. The Tennessee and New rivers eventually flow into the Gulf of Mexico. The fact the distribution of these closely related crayfish straddles the Eastern continental divide points to the belief held by many that the Linville River once flowed west into the Nolichucky River system, before it was captured by the Catawba River and began flowing east.”

Doing Our Part to Save the Crayfish

One of the most devastating factors to the continuing existence of Appalachian crayfish is pollution, which destroys the habitats crayfish need to survive. Coal mining in many Appalachian areas is one of the major causes, but sedimentation and erosion also contribute. Development and deforestation play significant roles, while dam and reservoir building restrict the areas crayfish can safely traverse.

Organizations such as the National Wildlife Foundation and the Alliance for Appalachia host fundraising activities to further research, advocate for stricter environmental laws and create awareness about how our actions affect our mountain home — one of the most biologically diverse regions in the world.