The Ginseng of Madison County

The Ginseng of Madison County

A boon and a bane both

Madison County, North Carolina, sits in the northwest corner of the state. Its northern borders trace across the peaks of the Blue Ridge Mountains, with Tennessee on the other side.

It’s a rural area, for the most part, as Marshall and Mars Hill are its biggest towns. But Madison County is famous for its ginseng.

The County calls itself the “Jewel of the Blue Ridge,” and you could say that ginseng is the jewel of the County. It grows wild and it is cultivated as a native plant, indigenous to the mountainous regions of the Blue Ridge. Ginseng is a highly prized plant that has become a boon to the area.

American Ginseng, Not the Other Kinds

Three kinds of ginseng exist: American ginseng, Asian (or Korean or Chinese) ginseng and Siberian (or Russian) ginseng. While they are all similar, they are different plants with different properties. Asian ginseng (Panax ginseng) and Siberian Ginseng (Eleutherococcus senticosus) grow in the Far East. American ginseng (Panax quinquefolium L) grows in the hardwood forests of the Eastern United States.

With a cool, temperate climate, the mountainous terrain in Madison County provides the perfect conditions for American ginseng. It grows wild on north-facing slopes under the shade of dense forests. It is a fleshy root plant. And while its leaves and stems do not survive the winter, it grows back each spring.

Ginseng is an herb used in traditional medicine. Herbalists, naturalists, botanists, chemists, Native Americans and settler families have gathered the plant to grind into powder or distill into tinctures. As medicine, it falls into the “unproven but accepted” category. It has been used to treat symptoms ranging from the flu to gastritis, erectile dysfunction and memory loss.

Asian medicinal philosophies rely on ginseng frequently for many ailments. As a result, it is in great demand overseas. One study determined that more than 90 percent of the American ginseng harvest is shipped to China. While prices vary, wild organically grown plants fetch significantly more than the commercially produced roots.

The Problem with Ginseng 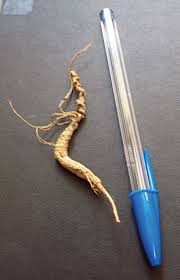 The news regarding the ginseng of Madison County is not all good, however. The rising price of wild ginseng and the floundering economy of the rural region have sent “ginseng thieves” scurrying into the forests to reap a bounty by poaching the crop. Mars Hill University, with a ginseng-cultivation program, has taken the advanced step of dying the roots of its ginseng plants in an effort to deter would-be thieves.

Worse, many poachers seem to know little about the plant, destroying its habitat and even ripping up plants too young to have any value at all. Poaching threatens the commercial industry that’s sprung up, and could very well damage the crop’s short-term viability. It can take up to 10 years for a plant to reach its full and most valuable potential. 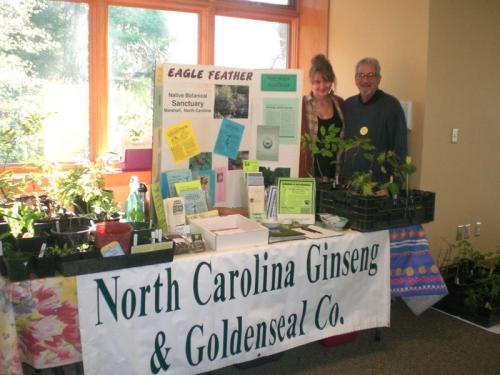 The North Carolina Ginseng & Goldenseal Company, run by Robert Eidus on the Eagle Feather Organic Farm in Marshall, grows and sells American ginseng and ginseng products, as well as other products. The farm uses organic, sustainable practices. It also hosts classes for the Southern Appalachian School for Growing Medicinal Plants.

An advocate for the sustainability of the ginseng crop in Madison County, Eidus disseminates honest and rich information about growing and harvesting the plant. He explains that the problem with many commercial growers of ginseng is the use of fungicides that the plant absorbs. It remains a known problem to growers, but not to consumers.

The difference in effectiveness between commercially grown ginseng and wild, organic ginseng is reflected in its market price. Commercial ginseng sells for about $20 per pound, while wild ginseng can fetch $350 per pound or more. While that explains the rush of poachers, it does not forgive them.