Spring Cleaning — Then and Now

No matter how easy it may have become, its origins grew out of concern for the family’s health and well-being.

Back in the 19th and early 20th centuries, Appalachian families kept their log cabins and brick abodes locked up tight during the winter to keep out the elements. Homes were heated

primarily with wood stoves, fireplaces and potbelly ovens. Oil lamps and candles chased shadows from the corners of every room, providing light for the long nights of winter.

Even though there usually wasn’t a lot of snow, the weather could get brisk in the mountains in the winter months. But as the sun started to stay out longer each day and wildflowers began showing up, Appalachian women opened their windows and doors to air out the house. Airing out the rooms was part of what has become known throughout the mountains as good ol’ spring cleaning.

Getting the Soot Out

The spring air was fresh and clean, and it blew away the wafts of smoke and built-up smells from cooking and living. Then came the task of getting the soot out of the linens and out of the nooks and crannies into which it had settled during the long winter.

The undertaking often lasted as long as three weeks. All the drawers and closets were emptied and aired out or washed. Every piece of woodwork had to be scrubbed to get the lingering soot out. Rugs were lifted and taken outdoors to be beaten with a switch until the last bit of dust left. Stovepipes had to be disassembled and cleaned. Bedding was removed and washed, with special attention paid to lice and other creatures that sought a warm place in the cold winter months. The wooden bed frames also had to be wiped clean.

It was up to the Appalachian women to get the house in order, in addition to their rigorous work of farming and cooking for the family. Come springtime, the men and children gravitated outdoors to hunt and play. Meanwhile, the mountain women took to their brooms and pots of heated water to clean the house — knowing they wouldn’t have much time for such mundane tasks the rest of the year.

The families of those mountain women endured the annual cleaning rituals; they knew if they didn’t, they’d be in for a heap of trouble. So while they tiptoed around the freshly beaten rugs and perhaps slept in the barn when the floors were still wet, they also did their share when asked.

As a line from the 1913 issue of the Housewives League Magazine reports:

“At the most beautiful season of the year,
when all nature was calling the children of men to forget their sordid cares a while,
the women were pursuing dirt, while the harassed men folks knew not where to lay their heads.”

Products of the Past 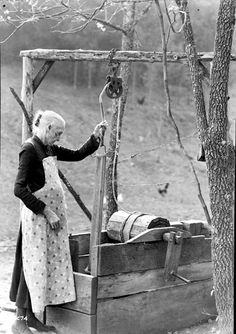 Detergent and commercial soap production didn’t begin in the United States until the 1930s and really didn’t make it into most homes until after World War II. At the same time, few homes in the Appalachians had indoor plumbing. By 1960, only about 61 percent of Appalachian homes had inside running water.

Women and children had to carry water from the well, sometimes two or three times a day. To the water women added baking soda and vinegar. Lemons improved the smell. What soap they had was made primarily from lye and animal fat.

Sweeping and airing out took care of the dust and lingering odors. The vinegar and lemon cut through the grease and smoky smell from the oil lamps. The darkened colors left by the wood-burning stoves ended up baked into the walls and furniture.

Spring cleaning today isn’t as rigorous for homeowners as it was before the turn of the 20th century. Houses are kept relatively clean throughout the year thanks to the modern conveniences of air filters, vacuums and dust-busters.

Men and women share household duties, even in the traditional Southern Appalachian Mountains, where old-fashioned values still reign in many communities. According to the last American Time Use Survey done in 2012, American mothers spend about 18 hours a week cleaning compared to just 10 hours that dads clean.

The amount of time spent doing housework actually has declined by almost 25 percent in the last 50 years, in part due to technology like better machines and cleaning products. It also might mean that less dirt gets into locked-up houses that rely on hermitic seals to keep out the dust. And there isn’t as much dirt being tracked through the houses, since few men and women work all day in the fields or spend weeks at a time hunting and gathering.

Furthermore, houses may be a little dirtier today as priorities shift away from the ideals of yesteryear. But no matter how much emphasis you place on having a sparkling clean house, springtime gives you an excuse to spend at least a weekend on the big cleaning splurge.

For those who undertake a yearly housecleaning in March or April, many have returned to the old-fashioned ways of making their own cleaning products. Some do it for cost savings, while other modern Appalachian men and women prefer to clean with chemical-free products.

If you dare to take the spring plunge, (and you’ll probably be glad you did) here are a few tips to make it easier:

Take this time to clean and disinfect. Then you can go out to enjoy your garden, get back on the hiking trails, ride through the woods on your mountain bike or go shopping for a new spring outfit. No matter what you choose to do with your free time, you’ll feel better about yourself and your house.

A thorough spring cleaning may in fact be good for your soul and your health. Feng shui says: “Cluttered house, cluttered life.” The Environmental Protection Agency says: “Inside your house may be five times as polluted as the outdoors.” A clean house gives you renewed energy and a holistic soul cleaning. Your great-grandmothers knew the value and so can you.