Farmers going back to the future for natural planting techniques.

Agriculture in the early American reaches of Appalachia kept families alive. They grew what they could, hunted when they could and gathered whatever they could find. No matter what they planted — tomatoes, corn, beans or beets — they always saved some seeds for replanting the following year. It was the only way to maintain a crop year after year.

Flash forward to today. Many American farmers buy hybrid or genetically modified (GM) seeds. These seeds cannot be replanted; they are unstable and won’t reproduce the same crop year after year. Hybrid and GM seeds are good for one season, and then the farmers have to buy more. It’s a great business model if you sell those seeds. If you’re a farmer, not so much.

What Are Sow True Seeds?

When you replant seeds year after year and continue to produce the same crop, they are considered to “sow true.” In other words, you will reap exactly what you sow. If you plant heirloom tomatoes, for example, that’s what grows. Sow true seeds are stable, so you can save and replant them every year.

GM plants pose a danger to sow true and organic plants, especially grains. A farmer growing organic, sow true seeds might see his crop inadvertently contaminated by a GM crop pollinating up to 20 miles away. Not only will his crop lose its organic status, but also the farmer will lose his seeds, since the new crop, being a hybrid, will no longer sow true. It’s a double whammy of economic hurt.

So the race is on to save sow true seeds. One company, located in Asheville, NC, collects and sells only sow true seeds. It’s called, not surprisingly, Sow True Seeds (SowTrueSeed.com). They sell seeds for flowers, vegetables, bulbs, tubers, herbs and sprouts. All sow true, year after year, so you can save the seeds of your crop and replant the following year. Sow True Seeds sells dozens of varieties of vegetables, herbs and flowers, and they are always on the lookout for more varieties.

Carol Koury, the founder and owner of the business, says, “We seek out farmers who have seeds that have been handed down for generations, especially those that are popular in Southern Appalachia.” 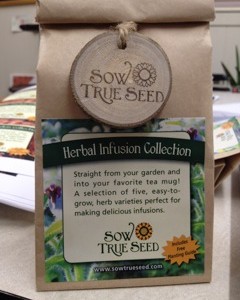 This region enjoys a long growing season, so many plants grow well here. Koury continually is on the lookout for more varieties of seeds.

“Unusual varieties are the most popular,” says Koury. “I didn’t realize how hard it would be to find some Southern favorites like greasy beans,” referring to a high-protein Appalachian staple that sustained settler families during harsh winter months.

Sow True Seeds works with two organizations in its quest to reach out and educate the community: Appalachian Sustainable Agriculture Project (ASAP) and the Carolina Farm Stewardship Association (CFSA). In addition, the business works with the state university system to find seeds and test germination, as required by law.

There are many obstacles for a small business selling seeds, but it’s a labor of love. Koury’s passion for sustainable agriculture (even in potted plants on an apartment balcony) is palpable. Her company employs 10 people, five full-time, and gives back to the community through a variety of initiatives.

“I founded this company to be a business that does no harm, supports its employees and the community, supports local farmers, educates people about food, and is a responsible corporate citizen,” says Koury.