The Heart and Soul of the Dulcimer

An Appalachian dulcimer-maker carries on the traditions.

The dulcimer has long been considered an Appalachian instrument. The mountain dulcimer — also called the Kentucky dulcimer, Appalachian dulcimer and lap dulcimer — basically is a fretted zither, consisting of a narrow fingerboard with strings attached to a slightly larger sound box. Although traces of the dulcimer date back to the crafts movement in the 1800s, it’s only been since the 1940s that the dulcimer has captured the heart and soul of Appalachian musicians.

Traditional dulcimers have only three strings, although a fourth string was added to enhance the volume of the melody. The instrument is made from common Appalachian woods such as black walnut, redwood and Sitka spruce. Used primarily for Appalachian folk music passed down from English traditions, the dulcimer also found a niche in the urban northeast folk music revival scene. British balladry, dance tunes, minstrel show tunes, popular sentimental songs, gospel, blues, commercial hillbilly music, and party songs accompanying children's games and social dances are common repertoires for the mountain dulcimer.

The modern dulcimer lives on through the artists who lovingly reproduce the simple instrument by hand. Though they rely on a few power tools, the true dulcimer maker derives pleasure 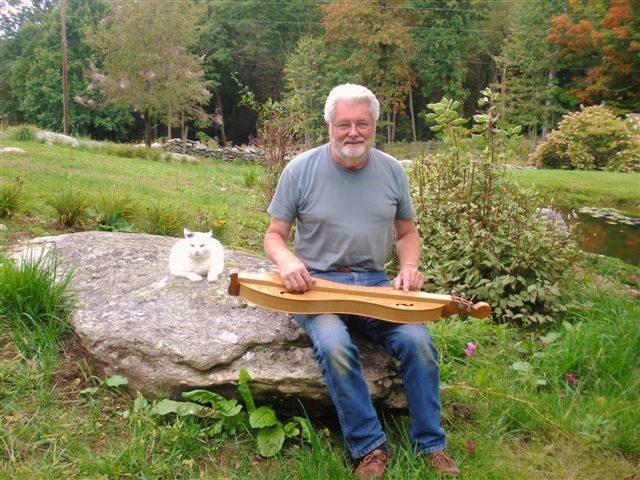 from putting a little of himself in every instrument he crafts.

Walter Messick has been crafting dulcimers from his Southwest Virginia home in the heart of the Blue Ridge Mountains since the early 1980s. A former preacher, he apprenticed under Albert Hash and his daughter Audrey, and today runs Cabin Creek Musical Instruments. Like many of his peers, Messick runs a one-man shop where he creates the instruments he sells through his website and at a few fine craft shows around the country.

Messick’s dulcimers are made from scratch out of locally harvested woods. He creates both the teardrop dulcimer, reminiscent of the musical instruments played for the past 100 years in the Virginia mountains, and the hourglass dulcimer, which hails from the hills of Kentucky.

Messick joins the ranks of luthiers (makers of stringed instruments) that dot the Appalachian countryside. Many offer dulcimer-playing classes and dulcimer-making workshops. A few other notable dulcimer-makers skillfully continuing the tradition include:

If you want to listen to some of the sweet tunes of the dulcimer, you can visit Everything Dulcimer for a list of dulcimer festivals that go on from coast to coast. Friends of the Mountain Dulcimer lists a plethora of events around the Appalachians. The instrument isn’t difficult to learn, if you’re so inclined. So order one of your own from the many fine dulcimer-makers who will not only provide you with a simple instrument to play, but also give you just a little piece of their hearts and a path straight to your Appalachian history.

Walter Messick with one of his mountain dulcimers