No other wild animal in the Appalachians is as recognizable as the white-tail deer. Whether a mature buck with splendid antlers, a graceful doe, or a spotted fawn running with it's mother, the white-tail deer is one of the most popular animals.

The white-tail deer (odocoileus virginianus) is a medium sized deer native to many areas of the United States including the Appalachians. 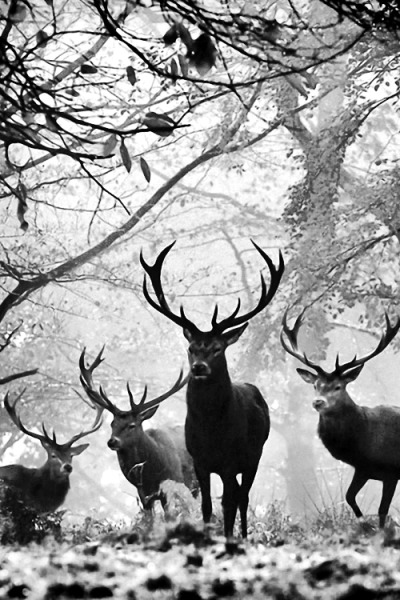 They are generalists and can adapt to a wide variety of habitats. In the Appalachians they like creek and river bottoms, oak ridges, pine forests, farm lands and most types of habitats that offer cover.

The white-tail deers coat is usually reddish brown in the summer and turns to a gray brown throughout the fall and winter. The deer can be recognized by the characteristic white underside to it's tail. It will raise it's tail when it is alarmed, to flag the other deer. Male deer regrow their antlers every year. Bucks with branching antlers are "spike bucks." the spikes can be quite long or short and are determined by nutrititon, age and genetics. The number of points, the lenght and thickness of the antlers is a general indication of age but a better indication of is the length of the snout and the color of the coat. Older deer usually have longer snouts and darker coats.

White-tail deer are herbivores. They eat many green-leaved succulent plants and tender new growth of stems and fruit. (This is often a nuisance to gardeners.) One of their most important food sources is acorns. Deer also forage on a variety of agricultiral crops such as corn and wheat.

A deers home range is usually less than a square mile. They collect in family groups of a mother and her fawns. When there are no more fawns, she is solitary. Male deer usually live in groups of 3-4 except during mating season when they are solitary. The deer density can range form 15 to aver 45 per square mile in the Appalachians. Because of deer management programs the greater population of deer are seen in more rural areas. Over population of deer in forests can threaten some species of plants such as ginseng.

White-tail deer are often seen along the Appalachian Trail, throughtout the Smokies and on the Blue Ridge Parkway. In some areas, such as the Shenandoah National Park in Viriginia, deer are often seen in herds or in small groups on the Trail. They are also easily spotted in areas of open fields such as Cades Cove and Cataloochee Valley in the Great Smokies National Forest. Deer are seen throughout the day but are most active in the evening. You may spot many deer crossing signs along the parkways and byways as a reminder of their unpredictability in crossing in front of traffic.

The white-tail deer has also earned it's place in Christmas. You can find an amazing assortment of lighted deer in Christmas light displays, statues of glittering deer on mantles, deer ornaments on trees and prancing deer on greeting cards.