While Southern Appalachian towns may get snow occasionally, the mountain peaks often are covered in wintertime. Many welcome the snow; others simply move further south to avoid it. But the Appalachian Mountains stand in a temperate region, which translates to seasonal changes. The Central Appalachian area experiences a vibrant spring, a lengthy summer, a glorious autumn, and a snowy winter.

But it’s not all work and no fun. Winter brings special treats — and not just from the holidays. Central Appalachian residents also reap the natural beauty and joys that come along with the weather.

It’s not uncommon to see bear and wild turkeys in the months leading up to the winter, but the sights that stick with you are the flashes of red against the backdrop of winter woods. The vision is even more memorable when snow has blanketed the ground. That’s when the color red is least expected… and when it tends to stand out all the more.

The Central Appalachian Mountains and the surrounding woods are home to several species of red birds. The summer tanager and the scarlet tanager, both red-bodied birds, are rare in the winter Appalachians, but they may start to reappear in early spring, when late storms still dump snow on the region. In both species of tanager, it’s the male who develops the red body. The females tend toward yellow.

to the Appalachian Mountains: the red-bellied and the pileated woodpeckers. The red-bellied variety, despite its common name, has a more plainly visible red hood. The female does develop a reddish hue on its belly, but it’s the birds’ heads that make it identifiable. The pileated woodpecker (featured) is mostly black, but its head has black and white stripes, capped with a bright red pointed cap. Both species stay in the Appalachian woods during the winter, but you may hear them before you see them. 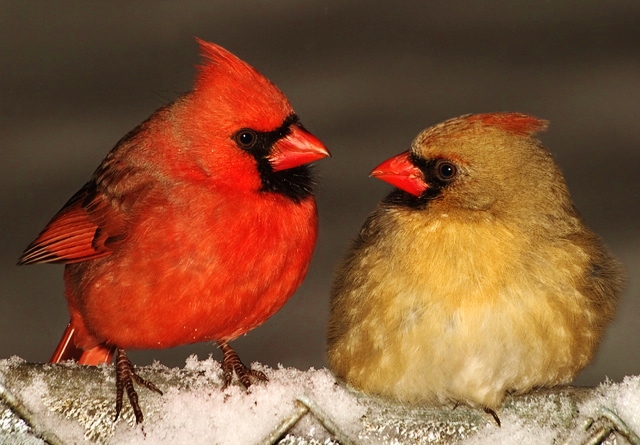 As shown in the photo to the right, the adult male is much brighter than the female, but both are visible throughout the winter months, especially after a snowstorm. Where other species have stripes or spots of red, the northern cardinal is completely red, making it hard to miss.

Since people tend to stay indoors more often, winter weather brings families and friends closer together. Meals are shared and spirits are consumed in an attempt to ward off the cold. Outside the house and beyond the hearth, however, lie the unexpected delights of the season: the red berries of holly trees, the naked white bark of the birch and the sudden appearance of a furrowing animal.

Natives and long-time residents of the region have become accustomed to the annual drop in temperature. They don’t avoid the cold weather; they prepare for it. Storm windows are lowered into place. Wood stoves are cleaned and checked. Firewood is readied.

So if you find yourself in Central Appalachia in the winter months, look for those flashes of red in the woods. If you see one, you’ll realize the beauty of the moment, regardless of the temperature.