Ray’s Got His Way with Weather

“I don’t trust any other weather forecast except Ray’s.”

“Ray’s Weather is the most accurate weather report there is.”

“The TV meteorologists have nothing on Ray.”

These are common statements heard from followers of Ray’s Weather Center, a company that uses the Internet to relay forecasts for Western North Carolina.

Dr. Ray Russell and his team of forecasters provide weather reports that cover the weather in areas from the North Carolina/Virginia line to Waynesville, NC, from the Mountains to the Foothills, and all the micro-climates in between.

From Hobby to Household Name 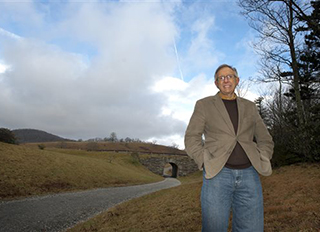 Ray always had a passion for the weather. He’s a computer science professor at Appalachia State University in Boone, North Carolina, and did his first snow forecast on the school’s website in the 1990s. As a weather nut and computer whiz, Ray’s avocation and vocation collided to create a perfect storm, so to speak. He was able to take advantage of the new popularity of the Internet to distill his weather reports.

By 2000, he had his own site called RaysWeather.com, the name that still serves as his home page today. In 2014, Ray’s band of merry forecasters provides weather forecasts on 21 different websites ranging from AshevilleWeather.com to WolfLaurelWeather.com. Ray and his team have a pretty good record when it comes to long-term forecasting too. In 2013, he was within .02 inches of actual snowfall in Boone and 18.5 inches off the actual astounding snowfall of 100 inches at Beech Mountain. No wonder ski buffs and outdoors enthusiasts appreciate his sites.

Ray relies on the El Nino Southern Oscillation data to make his predictions. Coupled with Pacific Ocean patterns, North Atlantic Oscillation and remarkably reliable “hunch” factors, Ray seems to be able to put his experience and his team’s meteorological expertise on the mark more often than not.

In addition to Ray, the team providing the analyses consists of:

Ray produces a Blue Ridge Parkway calendar each year that’s composed of pictures taken by people who submit their photographic entries in an annual contest. His website followers vote on the entries that make it into the calendar. For the 2015 product, he received 398 entries. See our shop to purchase one of his amazing calendars.

Ray’s Weather Center has become one of the most widely read media outlet sites in Northwest North Carolina. With about 4 million page views each month, he has a regular following of about 250,000 readers monthly. If you want to plan your ski vacation or find out when the weather will support a whitewater rafting trip next summer, turn to Ray’s Weather. There are no guarantees, but you just might get a little closer to reality with these geeks who live for the weather.