Gary Ray grew up in Weaverville, North Carolina, the son of a tobacco farmer and local builder. His daddy, Frederick Prince “Dan” Ray, had a hand in many of the buildings that grace the Appalachian city of Asheville. Gary was the middle son of three children who lived a stone’s throw away from his grandparents and spent weekends and holidays with a slew of relatives on both sides.

Gary went to North Carolina State University and earned a degree in history, so it was with great chagrin that he knew so little about the history of his own family. It wasn’t until he was grown that his daddy began to share some of the stories of his ancestors, especially any that were famous. But with Shelton blood running through both sides of his family, there were bound to be some hair-raising tales.

Up On the Hill 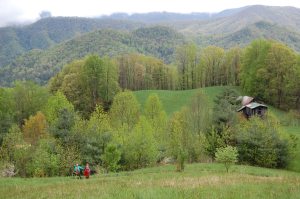 It was the end of May 1992 and Gary was attending the Shelton Family “Decoration” at Shelton Laurel, a lush mountain valley in Madison County. (A portion of this land is pictured to the right.) Decoration is an old family tradition in the South during which families visit the graves of deceased ancestors and decorate the sites. His family Decoration gatherings usually included a meal and then a trip up to the grave hill above Solomon Shelton’s farm. Gary had been going to the Decorations for years, but this year was to be something special.

To beat the heat, Gary and his daddy got in the car and cranked up the AC. They drove up to Solomon’s farm past the standing chimney of Granny Judy’s cabin. The cabin is long gone, but the chimney still stands as a sentinel where Judy Shelton’s house once stood.

Granny Judy was Gary’s great-great aunt and a mountain woman fiercely protective of her kin. A fabled lady who lived in the cabin during the Civil War, she is said to be the lady who started Gary’s branch of the Shelton family. He had seen her chimney every year of his life, but knew nothing of its history. 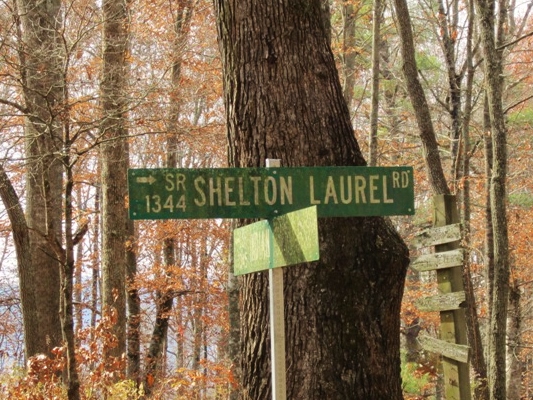 Gary and his father stood outside the car in the heat gazing out over the valley. His daddy turned to him and asked if he wanted to see where his relatives who were shot by the Confederates for stealing salt were buried.

Gary was flabbergasted — he knew nothing of this tale. Sweating, they trekked up the little knob behind Granny Judy’s chimney. They struggled through vines until they came upon a very old graveyard.

Past the surrounding trees, a few simple rocks stood guard around the graves below. At the very summit of the little knob lay a modern flat stone engraved with the names of those killed in the Shelton Laurel Massacre of January 1863. 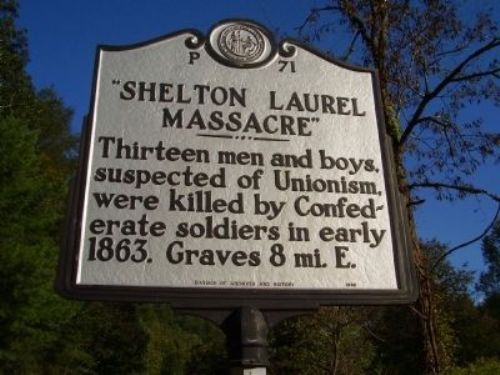 Granny Judy had the bodies of those killed and buried down by the creek moved to the knob above her cabin sometime after the event. This revealing trip to the secluded knob started Gary on a long search for information about what happened on January 18, 1863.

He learned there was a gorilla raid on Marshall in early 1863. The bandits primarily searched for salt, which was the only way people had to cure meat in those days. The raid on Marshall so upset the local Confederate leaders that they arranged to invade the Shelton family’s valley a few weeks later.

They rounded up 15 men and boys as suspects. It is very unlikely that any of these prisoners had actually participated in the original raid because most of the men had fled into the mountains when they heard the Rebels were advancing. During the night before the massacre, two of the prisoners escaped. The remaining 13 prisoners were held in Granny Judy’s cabin, expecting to be marched to town and tried. But that was not to be.

During the morning of January 18, the Rebel soldiers and their prisoners started marching down the creek toward the mouth of the valley. Instead of being taken in, though, they were summarily shot by the Rebel detachment.

All of this might have gone unnoticed except for the fact that the Civil War Governor of North Carolina, Zeb Vance, was from Weaverville, very near Madison County. Vance was so incensed by the act that he urged investigations. He wanted to see that the Rebel soldiers who had done the deed were punished. Marauding soldiers of the opposing side could be shot, but not civilians. The Rebel soldiers claimed that the men and boys who were shot were guerillas and could be executed.

In the aftermath of the killings, there were trials, jailbreaks and military protection of those responsible. Not much ever became of all these efforts, but the story of the killings up in the small mountain valley remained. What seemed to be a footnote in a violent civil war would not die.

The killings were featured in the book and subsequent movie Cold Mountain by Charles Frazier. The story continues today with mentions in many modern works. For example, in the book The World Made Straight by Ron Rash, the killings are featured prominently. A movie is being made from that book; it’s due out in 2015.

The Ties That Bind

Gary never would have known anything about the killings and his family’s involvement in the Civil War atrocities without his Daddy taking the time to share the story on that hot hill full of graves.

His father has long since gone to his reward, but the Shelton family stories live on. Gary learned a powerful lesson that afternoon: “Never lose the opportunity to listen and learn from those who came before us,” he said. “We can read about history, but knowing those who lived it gives new meaning to family.”